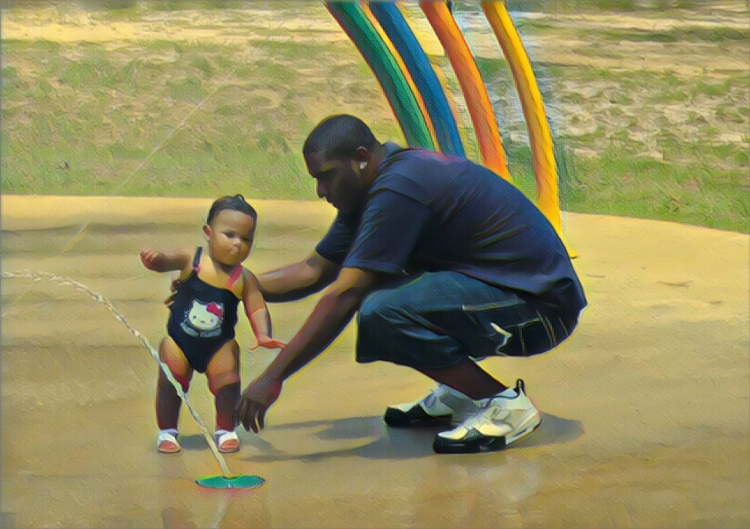 I like many kids grew up in a single parent home. Not a co-parenting environment, unless you count my grandma, but an actual home where one parent does everything. Although my mother never talked down on my father when I was younger, it was clear that his consistent active presence was non-existent in my life. To be honest, I have maybe 5 real memories of him from my childhood that I definitely remember.

As a teenager, I can say that he was trying to build a relationship with me when I got to high school, but I didn’t know how to do that, so the outcome became poor on both parts. A seed of “get what’s owed to you” was planted in my mind, so all I knew to do was ask for things. He came through a couple times, but it was short lived. I assume any man would feel like bouncing out once it becomes clear, money is the only motivation of company. At this time of my life, I can’t say that I’m angry or even hate him. I just don’t know how to do “this”. This being build a father-son relationship. I’m still a child. I don’t know how this works. My friends have active dads, but I didn’t know how to apply that dynamic to my life.

As I get in my later teens and early 20’s, it’s whatever. I don’t feel that I need the relationship I never got with my Father. I think I’m grown and “I got it from here”. I’m wrong, but I don’t know that yet.

I’m happy to say now, I’m in a great spiritual place and I have no beef with this cat…That’s my Pops.

Throughout all these years, I told my mom “Happy Father’s Day”. I think at one point I was even buying her Father’s Day cards. Why? Because that was the glaring narrative that was pushed for “The Fatherless Children”. It was ingrained in our minds to acknowledge the woman who “Play both Mommy and Daddy in the house”. It was a narrative I ran with for years…until I had a child of my own.

I don’t think people know the things I have gone through mentally, emotionally and psychologically being a parent. In someways, I lived my greatest fear and potentially worst nightmare. I had a child without being married with a woman I had no true desire to be with long term. That relationship in itself can’t be summed up in a few words or one post. It was my greatest fear because I didn’t want to be what I had experienced. A predominantly absent father in the life of a child who truly needs me. I built heavy anxiety over this. I had no idea what I would do with this new reality I was facing. Then the relationship with the mother made it worse.

Imagine a person who claims to love you. Love you more than anything and wanting to be with you and wanting to “make a family work” even though you don’t feel the same. You then say, I want to be a parent. A real parent. I help to help and assist in raising a wonderful child, but I don’t want the package that is “us” with that. You put truth and action behind those words and then that person leaves with the child. They begin to make it difficult to see, talk, bond and nurture the child from your perspective. You are given hurdles, hoops, summons, court dates and last minute invites. You’re expected to honor court orders and “do more”, but even 1 hour alone with the child in exchange can’t be done. All of a sudden, you’re not “fit” to be alone with a child, but yet the previous year, you were the one taking care of everybody and you didn’t complain once about it. These type of occurrences happen consistently and for years. What do you do? You’re trying. You are really willing and able to at least give time. You can’t afford a lawyer to get your rights as parent. What will you do?

I can understand the anger, bitter and rage-filled mind those action breed. I can empathize on wanting to give up on every aspect of the situation. I can see why some parents don’t have it in them to continue to fight, endure and deal with the other parent who takes it upon themselves to orchestrate an emotionally charged heart-wrenching gauntlet for reasons that have little to nothing to do with the child.

I’m not saying the above is what definitely happened to my dad. Till this day, I honestly do not know why our relationship is the way it is. But I pray and consistently stay in the fight to make sure that these instances don’t end Layla’s Dad.

My soul would crush into a billion pieces, if my daughter told her Mother, Happy Father’s Day. The things I have felt and endured to just get a hug from her. The holding of my tongue and the amount of pride and shit I had to swallow to get the phone to pick up consistently. The action that kept me away from a birthday party that I was still going to make it to even though I was going to be unemployed at the party. Yeah, it would hurt me beyond any words that I can type if she told her mom, Happy Father’s Day.

Again, I don’t know why my Father wasn’t around as much, but the life I have lived as a Father in an undesired situation has made my acknowledgement of women on Fathers Day non-existent. Even for the one I know for a fact had the biggest hand in raising me. She doesn’t need this day. She’s had the other 364. Birthdays, Mother’s Day and Christmas were always a highlight. As a Father, I can tell you it’s been a very long time since I have gotten 24 full hours with my daughter. And the last time wasn’t my birthday, Christmas or Fathers Day to be clear. Through it all, I make it a point to be a presence, make a bond and never leave my greatest creation wondering about me. Yeah, I’m supposed to do that, but you got to live the life to know that sometimes, it ain’t that simple.

My daughter is my life saver. I really didn’t care if I lived or died before her. She gave me greater purpose and it’s an unreal feeling when you can’t connect with your purpose. That’s why I won’t quit. That and cause I know my daughter truly loves me. I know she loves me, trusts me and enjoys our moments no matter how long or consistent they are. That alone will keep me in the fight forever.

For a few years now, My mom has asked, “Why I don’t tell her “Happy Father’s Day” anymore?” I have yet to come up with a reply I think will be understood.

This site uses Akismet to reduce spam. Learn how your comment data is processed.